Following the same principles, an ALTTO "sister" trial is being conducted in parallel in collaboration with the BIG member group SOLTI (GRUPO ESPAÑOL DE ESTUDIO, TRATAMIENTO Y OTRAS ESTRATEGIAS EXPERIMENTALES EN TUMORES SÓLIDOS; http://www.gruposolti.org): the Neo Adjuvant Lapatinib and/or Trastuzumab Treatment Optimisation (NEO-ALTTO). This trial's primary objective is to compare the rate of pathological complete response (total disappearance of the tumour) at the time of surgery between three treatment arms.

This trial allows 3 drug therapies to be compared in various combinations to find the most effective treatment. Women with HER-2 positive tumours larger than 2 cm are randomly assigned to one of the following 3 treatment arms:


Definitive surgery is performed within 4 weeks of the last dose of paclitaxel. After surgery, patients receive 3 cycles of adjuvant chemotherapy (FEC: 5-fluorouracil, epirubicin and cyclophosphamide) followed by the same assigned pre-operative targeted therapy for 34 weeks, with the intention to complete 1 year of anti-HER-2 therapy.

A total of 455 patients were enrolled in the period from January 2008 until May 2010. The trial took place in 86 sites across 23 countries in Europe, Asia, South Africa, North and South America.

A second analysis on event free survival was published in Lancet Oncology (2014) showing no significant different in event free survival between the three arms, although it is worth noting that this was a secondary endpoint of the study, which was not powered for such comparison. However, patients who achieved pCR across the treatment arms had significantly better event free survival compared with those who did not achieve pCR (HR 0.38, 95% CI 0.22 - 0.63, p=0.0003).

Other research projects were also completed within the NeoALTTO trial, which include the following: 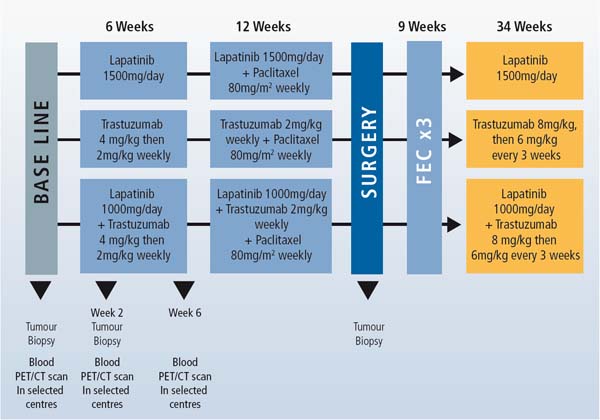